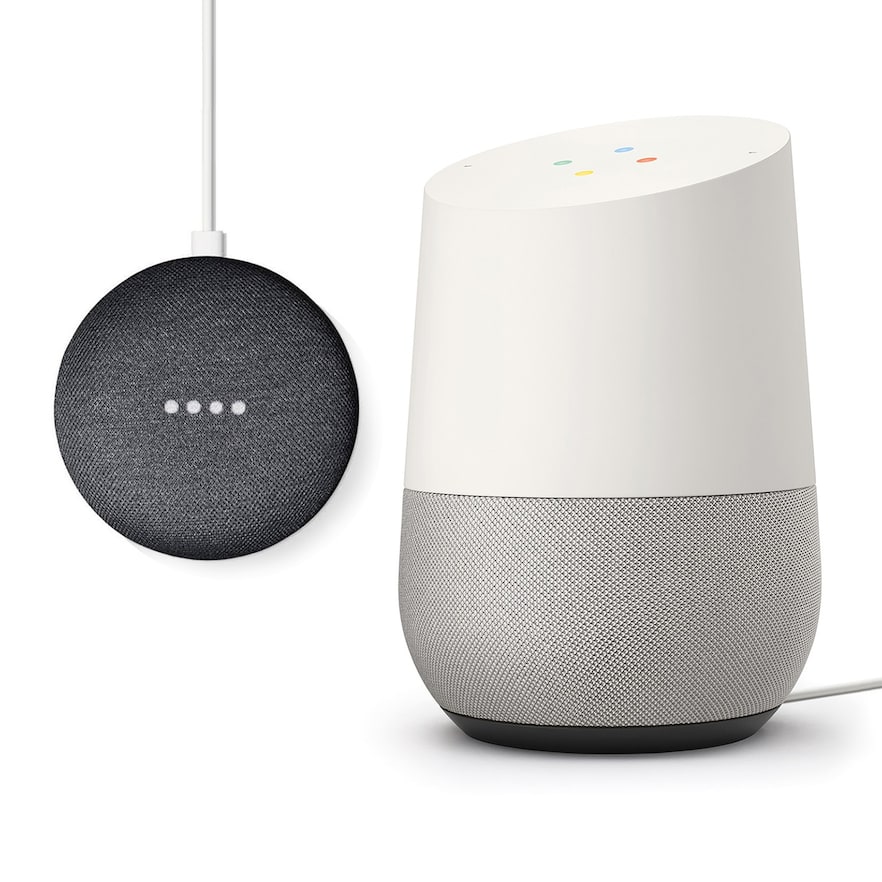 Google’s Home and Home Mini smart speakers were released in the United States in November 4, 2016, in the United Kingdom on April 6, 2017, and it was just released in India – almost a year after it was released in the US and UK. So, what do consumers think of the Google’s smart speaker? This Google Home vs Google Home Mini comparison review will give a comprehensive overview of the speakers – what people liked, what they didn’t like, and what may be coming soon with new versions of Google Home.

Google made their Google Home and Google Home Mini smart speakers to look good in your home – it is almost reminiscent of an air freshener. They are cylindrical in shape, come with a grey fabric base and rubber bottom. However, this grey base can be swapped out for different colors. Right now, Google offers six colors, which are mango, marine, violet, carbon(black), copper, and snow(white). The first three are fabric like the grey and the last three are metal bases. When compared to Amazon’s Echo, the Google Home is much more attractive and blends in better with your home. The design of the Google Home in this review is not all just for aesthetics though – it does carry some function. The top is a touch activated panel which allows you to control the volume, pause/play music, or activate Google Assistant. Google Assistant will also activate if you simply say, “OK Google” or “Hey Google”, and once activated you will know by 4 multicolored lights moving around. Users have found Google Home’s touch screen to be less precise than that of the Echo, but one welcomed addition was the button for muting the speaker, so that you can know for sure it is not listening anymore.

When it comes to listening, Google has some work to do on their Home and Home Mini gadgets. Consumers have found that it does an ok job picking up your voice most of the time, but it does not work all the time. Google Home relies on two built-in microphones at the top of its chassis for listening, while the Echo has five. It could be this lack of microphones holding the Google Home back, or it could just be Google’s software, but hopefully it will be updated to fix this problem. However, when it does work, it has a lot of capabilities, such as greeting you, telling you the weather, or giving you news information all with a simple, “Hey Google, good morning”. And, as for security of your information, certain requests require voice authentication. When you uncap the base of the Google Home review, you see a speaker and two passive radiators. This smart speaker, along with a few more speaker inside its chassis, allows it to put out good volume and sound quality when playing music. Using Google Home as a speaker may be secondary to Google Assistant and its AI, but that doesn’t mean it lacks in that area. It is great because it works as a WiFi speaker and it can access almost any streaming service from Google Play Music to Pandora. This means that if you can think of a song, it’s almost guaranteed that Google Home or Google Home Mini can find it and play it for you. When compared to other devices, the Google Home blows them out of the water when it comes to song library. However, because it is not as strong in the listening department, Google Home has trouble recognizing band names that sound similar.

Google Cast and Chromecast is one thing Google definitely got right when it comes to Google Home. People were disappointed with the fact that Amazon’s smart speaker, the Dot, can be plugged into an audio setup, but the user cannot choose which speaker is used for output using voice commands. Google fixes this problem with Chromecast – if you set up a Chromecast with an easy to pronounce name, you can tell Google Home to play to whatever speaker you want. The one problem with this, is again, the listening capabilities of Google Home. When using the command, your pronunciation must be perfect, or it will not be recognized and the command will fail. Controlling Your Smart Home with Google

Aside from Chromecast, the Google Home and the Google Home Mini have the ability to talk to many other devices gearing towards the movement to become the center of your home. Some examples are Nest thermostats, Philips Hue lightbulbs and Samsung’s SmartThings platform, but more are being added. If you have a lot of smart home devices connected, Google Home will make a good addition for controlling them all with your voice from one platform. Functionality of conversation between Google Home and these products has been found to work very well when tested, with the only drawback being that you have to sign in multiple times.

Google has the hardware integration with other products down, but it is lacking when it comes to software integration. You would think Google Home would be able to control Google’s own services, but it cannot integrate with many of them, such as Gmail, Calendar, and Docs. The potential here is huge – imagine if you could create new events in your Calendar, or take some notes in Docs just by telling Google Home to do so. If Google can put some time into developing software integration, this Google Home review can be taken to a whole new level. This is Google’s first attempt at a smart speaker, and it is not bad at all. Yes, there are some things to be improved, but that will come with time. When compared with the first launch of the Echo, Google Home and Google Home Mini are already better. If you are looking to purchase Google Home, you have the standard option for $129, the mini for $49, or the audio-enhanced Google Home Max for $399. There is no doubt that improvements will be made in the near future – Google Home can only get better from here.