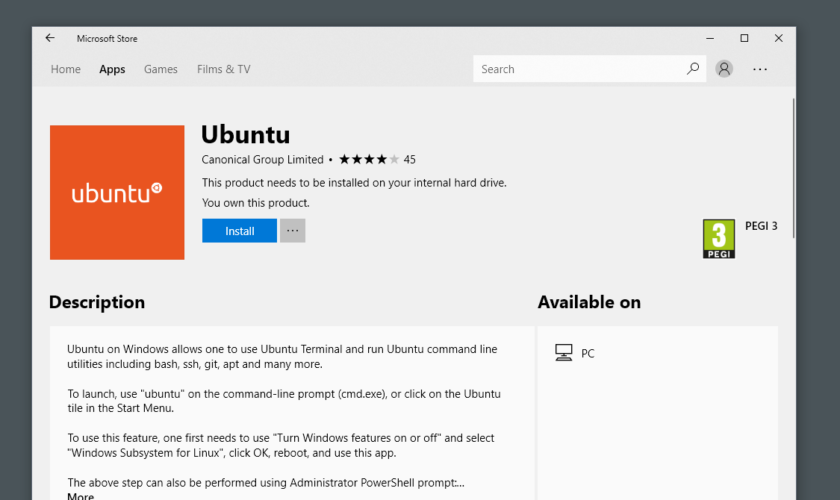 Microsoft has been slowly making moves to incorporate Linux into Windows 10. Earlier this week, the company released an open-source tool that will make it easier for Linux distribution maintainers and developers to run distros on Windows 10’s Subsystem for Linux (WSL). This tool will allow people to create custom Linux distributions for running on WSL. WSL was just released in 2016, so it is still developing, but this is a big next move.

WSL translates applications called by Linux kernel system into something Windows 10 will understand. It allows users to run Linux binary executables natively on Windows 10 by giving the user a Linux compatible kernel interface that can run a GNU userland, such as; Ubuntu, SUSE, Debian, or Kali on top of it. However, this interface developed by Microsoft does not actually contain any Linux kernel code. Therefore, it is not able to run all of the Linux software, and it cannot yet run graphical applications either. Microsoft sees it as being a tool mainly for developers working on open source projects – those using Windows can use WSL to run Linux software more directly than ever before, while using Windows apps.

At the moment, Ubuntu, openSUSE, Kali Linux, Debian and Fedoraa are all available in the Microsoft Store. Now that Microsoft has open sourced WSL, distro maintainers can easily add more distros to the store because they can create their own WSL packages for it. Therefore, those with Linux-based operating systems can run them on top of Windows 10 much more directly and easily than before. Essentially, this streamlines the process of porting a Linux distribution to run on the Windows Subsystem for WSL. Part of the reasoning for open sourcing is speeding up the process of developing WSL and getting people the distros they want and need as soon as possible. Tara Raj, a member of Microsoft’s WSL team, says, “[they] hope open sourcing this project will help increase community engagement and bring more of your favorite distros to the Microsoft Store” (techrepublic). Another reason is because many Linux distros already rely completely on open sourcing, so doing this will connect WSL with the OSS community. There are many advantages to open sourcing the project, and it is sure to bring many improvements and additions to WSL in the near future.

How Will It Work?

Because WSL does not support graphical applications or desktop environments, its distros run with a command line shell, instead of using tools, such as Apache and MySQL. Using the open source sample code for the reference installer provided by Microsoft, distro maintainers will be able to turn their distro into an app, which is then submitted to the Microsoft Store. These custom Linux distros cannot be distributed on the store unless they are submitted by a distribution maintainer, but the packages can be sideloaded onto a machine running Windows 10 in developer mode. This is advantageous, because multiple Linux distros can then be installed and run side by side.

Although there are obviously many advantages to WSL, there are also some disadvantages. Since Microsoft doesn’t support desktop environments or graphical applications running on WSL, neither can be used like one would on a dedicated GNU/Linux system. Also, production workloads cannot be run on WSL at the moment, so things like an Apache server supporting a website will not be possible.

However, it is very possible for Microsoft to find solutions to add these features and more in the future. With time, WSL can be developed more completely, but for now, it is already making a positive impact by giving users more choices when it comes to Linux.

Tweak Your Windows 7 Easily and Free

While it is true that there are many programs fully committed to optimizing Windows 7, the fact is that most of them always offer the same functions. But that is not the case for TweakNow WinSecret, a quick and powerful tool that will allow us to optimize many aspects of our operating system in an easy and uncomplicated way. It’s functions and features are always a mouse-click away when we need to use them. WinSecret TweakNow is a free application, with a really well organized interface, where the elements can be viewed and used immediately.

This tool is distinguished by how extremely fast it processes the commands given, especially in the section “Analysis of Record.”

It also includes various services for the elusive ability to change hidden system settings, a really well developed tool in this version of TweakNow WinSecret.

In short, thanks to the many tools included and how they are organized, TweakNow WinSecret becomes an essential application in the arsenal of anyone concerned about the performance of their operating system.

To optimize Windows XP and Windows Vista we recommend a simple utility that will help us maintain a clean registry of our operating systems.

We are refering to RegDefrag, a freeware application that helps us keep our Windows XP or Windows Vista in an optimal working state.

With time, our operating system becomes slow and unstable. That is why we need utilities like RegDefrag, a tool that defragments and compacts the Windows registry for free.

The usefulness of RegDefrag is great, especially to those who are new to computers. But it is very convenient to use even for those who work in the maintenance and optimization of computers. So there is no doubt that RegDefrag is a very good option to optimize Windows XP and Windows Vista (also supports Windows 7), and it’s also a free tool.