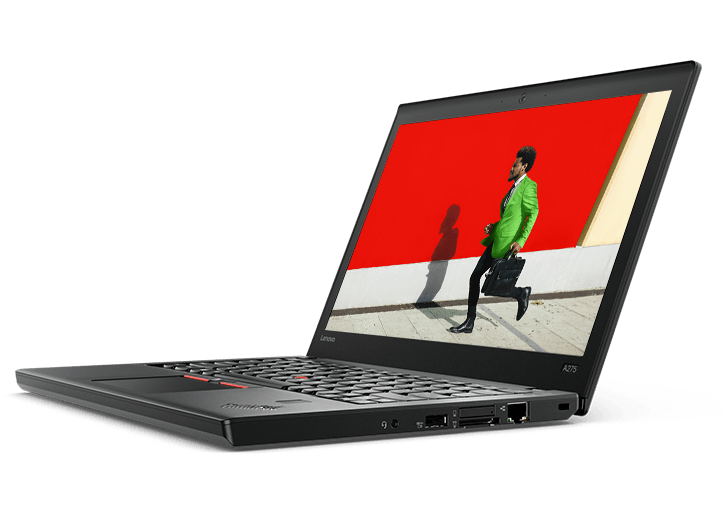 The Lenovo ThinkPad A275 laptop review is another attempt to provide business professionals with an amazing machine, able to deal even with the most demanding tasks. We know, the design is far from being appealing to the masses, but when you get this model, the way it looks is the last thing you’ll have to worry about. Let’s go over the full Lenovo ThinkPad A275 review and see if it’s actually worth the money, shall we?

Not once has Lenovo failed to prove that they can do a laptop for any budget or business need. Whether it’s an entry-level model perfect for beginners, or a high-end laptop aimed at those who are seeking something to impress with, this manufacturer surely has it in its portfolio. However, if you ask us, the guys at Lenovo do an amazing job developing business models – like the Lenovo ThinkPad A275!

Design of The Lenovo ThinkPad A275

The first thing you’ll probably notice about the Lenovo ThinkPad A275 is the matte polycarbonate shell – MIL-STD-810G certified. No, it won’t be able to resist a serious drop, but it’s very resistant in comparison to other laptops. The Lenovo ThinkPad A275 laptop is very solid and premium-looking. It comes with a rubber-coated lid and bottom, seriously improving the grip. Also, you won’t see any fingerprints or smudges left on it.

The hinges have an opening angle of 180 degrees and seem very tight, which is something very important, especially if you’re the kind of user who opens and closes the lid very often. And let’s not forget about the removable top case – it allows you to take out the keyboard and clean it once in a while. Laptops can get messy, you know. A very cool feature packaged with the Lenovo ThinkPad A275 is the presence of a fingerprint reader just under the arrow keys. It’s fast & accurate, and it works by simply placing your index finger on top of it, so you can add an additional layer of security. Otherwise, it’s the same bulky look the ThinkPad line got us used to.

Honestly, the display of the Lenovo ThinkPad A275 is one of the parts that disappointed us the most. It’s an average TN panel, with a resolution of 1366 x 768 pixels, something most manufacturers stopped using nowadays. The viewing angles are poor and the contrast ratio is low, at just 490:1. The color space coverage doesn’t make this model suitable for photo editing, for example.

For an average business laptop user, who doesn’t want much from a display and cares just about… being able to check out tables and reports, it’s definitely enough. On the other side, if you want a bit of a high-end visual experience, you should look for something else.

As a side note, bright sunshine hitting directly on the display will make this laptop almost useless, since you won’t be able to see a thing.

Right above the display we spot a 720p webcam. The quality is not the best, but it does the job.

As a part of Lenovo’s AMD business strategy, the ThinkPad A275 in this review is equipped with an A12-9800B processor, with four cores running at a frequency of up to 2.9GHz. The Lenovo ThinkPad A275 also features 16GB of DDR4 RAM, more than enough for keeping several browser tabs open and running other programs in the background (not just a browser) like most business professionals do. In terms of graphics, we’re looking at an AMD Radeon R7 (Bristol Ridge) unit with 512 MB. It supports DirectX 12 and runs to a frequency of up to 758 MHz. Therefore, don’t expect to be able to use this Lenovo ThinkPad A275 laptop for gaming, since it’s almost impossible, despite the graphics card’s dual channel support. You can give it a try though, but don’t try anything after 2012 or 2013, unless you want to be a bit disappointed.

As for the storage department, the ThinkPad A275 comes with a Samsung PM961 solid state drive with a capacity of 256GB. It’s obviously not that much, but let’s not forget that we’re talking about a pretty snappy storage unit, providing great start-up times and transfer speeds. Obviously, you can increase the storage capacity any time by using an external drive.

From our point of view, the Lenovo ThinkPad A275 review is definitely a champion, as the manufacturer took advantage of the bulky profile and stacked several ports on it. Specifically, we’re talking about USB Type-C, HDMI, 2xUSB 3.0, 3.5mm audio combo jack, SD card reader, a SIM slot, Ethernet port and (finally) a Kensington lock. Bonus points for the card reader that is able to achieve transfer speeds of 83 MB/s.

The list is completed with a Realtek-made 8822BE Wi-Fi chip and it supports Bluetooth 4.0. There’s also an Ethernet-Chip on the Lenovo ThinkPad A275.

The Lenovo ThinkPad A275 has a two-piece battery which transforms it into a real endurance champion. We’re talking about an impressive 16-hour battery life in idle – at minimum brightness and no computing activity. In regular usage conditions, the battery can last up to 4 hours, which is still very good for a laptop.

Generally speaking, this Lenovo ThinkPad A275 review is a very niche device. If you’re that kind of laptop user who doesn’t care that much about a high resolution or impressive performance features, the ThinkPad A275 is definitely worth trying. It has various battery options thanks to Lenovo’s PowerBridge Technology. Not to mention the multitude of ports. We are big fans of the fan system, which keeps the laptop quiet and cool. Overall, it’s hard to recommend this Lenovo ThinkPad A275 laptop, especially considering the over-$1,000 price tag. But if you want a secure device with a great battery life, it’s a laptop worth considering.